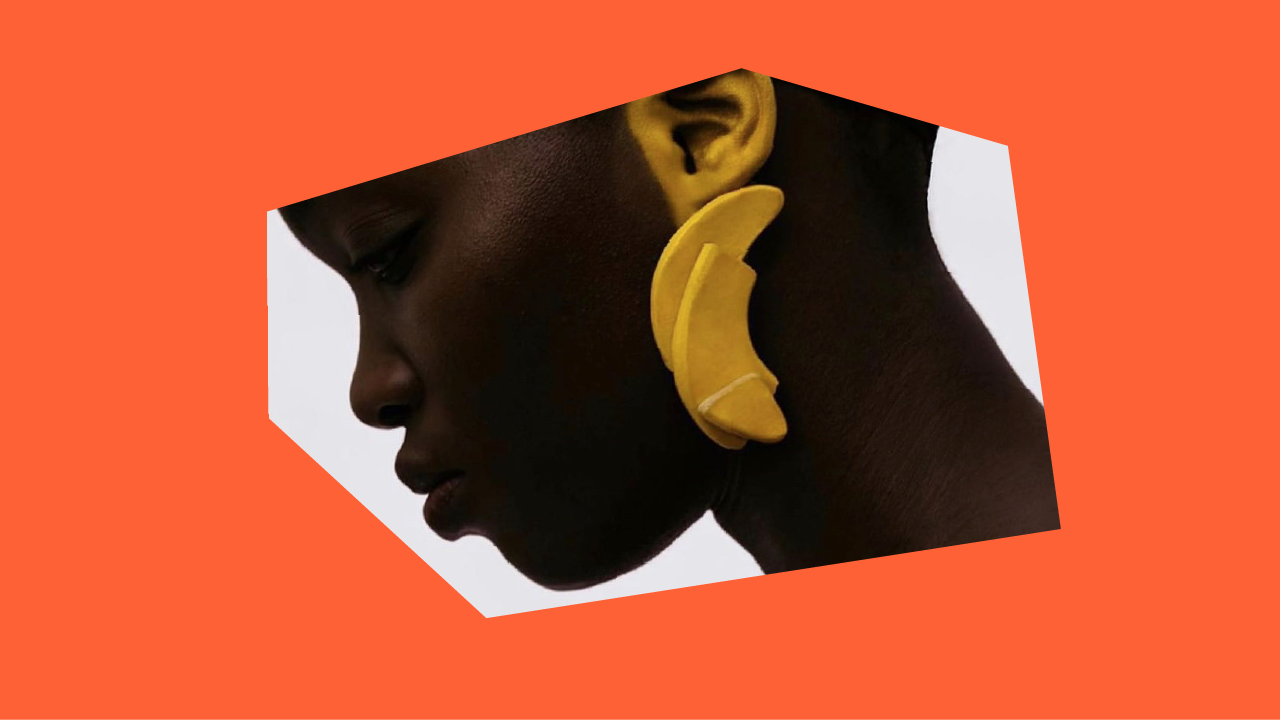 The emerging jewellery designer and sculptor from Cape Town uses clay to make statement pieces that speak to his lived experience as a queer South African of Indian descent who also just so happens to love all things bright and sumptuous.

Stemming from a personal passion for earrings, he first taught himself the art of clay while at university. In 2017, local fashion designer Rich Mnisi commissioned him to make some catwalk pieces and he’s been evolving his outlandish yet open-hearted aesthetic ever since. Other fashion collaborators have included LVMH Prize winner Thebe Magugu and NYC brand Tibi and last year he was nominated for the Most Beautiful Object in SA competition at the Design Indaba festival.

The 27-year-old’s oeuvre may seem free-wheeling. Some designs are boldly pretty, such as modernist organic forms, heart chains and paisley teardrops. Others are outright raunchy – think golden codpieces and nude self-portraits on tiles. He also has a soft spot for objects that appear to be unearthed antiques including Hellenistic bulls and Ganesh statues. But what draws these gloriously wobbly, gracefully fractured items together is Coopoo’s genuine dedication to making change in the most delicate way he knows how. Helen Jennings, editorial director or Nataal, speaks to the designer to discuss how jewellery gives him – and his community – agency.

HJ: How were you first drawn to jewellery?

GC: It was just a personal interest and clay was an accessible medium. I didn’t have the expertise to craft from precious metals and with clay I could also achieve volume in terms of object size.

GC: Yes absolutely. There’s also a universality to clay. It’s base. Jewellery is often prized as a precious heirloom but clay has no monetary value. For me, what makes it precious is its fragility, which means you ought to care of it. That has led me to look at ceramics in history, and this idea of loss and discovery. Ceramics have an ability to be appreciated at certain points of their deterioration and to give insights into the society from which they came. That brings into question what we’ll leave behind and what people will make of how we lived. I have done some cheeky works that pre-empt that discovery – Chanel and Dior earrings that look like ancient artifacts while representing something from the now.

HJ: That reminds me of Kintsugi, the Japanese art of repairing broken pottery with gold as a way to embrace its imperfections.

GC: Exactly. I’m thoroughly invested in the belief that something might be fragile but more beautiful for being so. I use clay as a reference to the way in which I relay my own healing processes, of being comfortable with my sensitivity and my ability to break. I like to think of this medium as a way of being porous and not too terribly jaded. 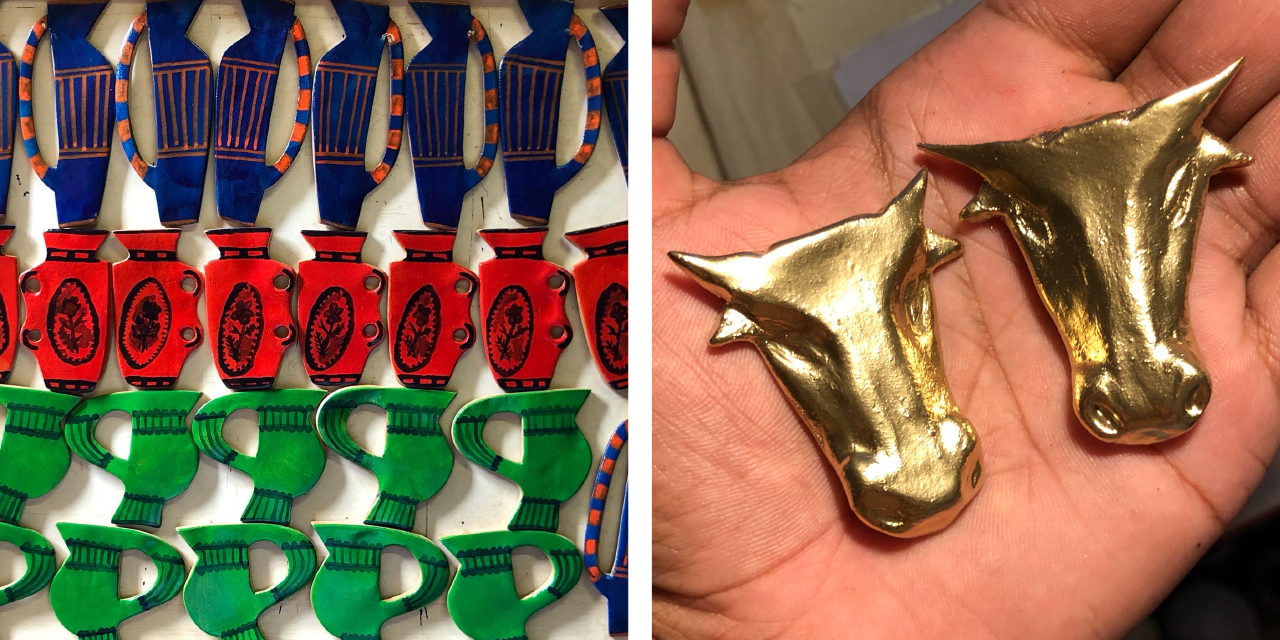 HJ: In what ways does your heritage speak to your practice?

GC: Some pieces are totally devoid of my cultural background and others are literally moulded from it, such as taking the shape of a deity statue in my home. But I resent the expectation of having to talk about my existence in my work. Being part of the Kutti Collective has been really helpful in that respect. We’re a group of nine queer south Asian artists from different disciplines who have been acting as a support network for the past two years. It gives us visibility within the visual arts in this country, and addresses tokenisms. We’re able to acknowledge ourselves as artists before being South Asian, which can get in the way. A good way to summarise this is that I want to use turmeric in my work, but I don’t want you to want me to use turmeric in my work.

HJ: I’ve heard the same sentiments from many African artists who feel this expectation to define their ‘African-ness’ rather than their work being about whatever they feel.

GC: I would love to just make pretty things that don’t have a severe attachment or depth to them. But I often feel because I’m queer, and Indian, and brown, and femme but I don’t look femme-presenting, and because I’m hairy, and because I’m HIV positive, that I can’t afford my work to not be in involved in my advocacy of these things. I don’t know how to differentiate myself from my brand, and I’m not upset about that, but I would love to create something that was more engaged in the politics of being pretty than things that are so steeped in meaning that they become inaccessible to people.

HJ: Having said that, your jewellery is also full of celebration, humour and joy, not to mention plenty of colour.

GC: There was no decision to be so unrestricted with colour. I imagine myself having some kind of palette but then it becomes messy and fun, which is me trying to figure out what I’m doing in my work and going in so many directions. 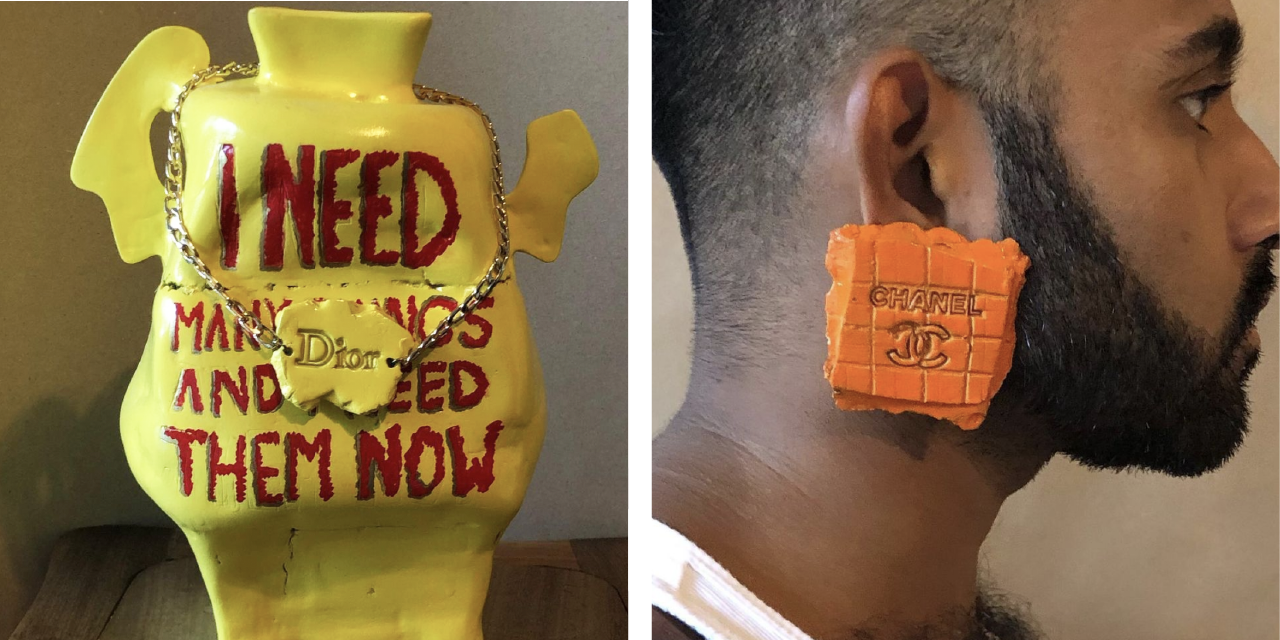 HJ: Your text-based pieces certainly don’t hold back. How did come to be compelled to add words to your work?

GC: I’d seen it done by Hylton Nel, the gay South African ceramicist whose charming little epitaphs I find very captivating. And although I believe the use of symbols and shapes are far more successful in communicating meaning, I came to the point that I needed to have these overt statements. I found my friends saying the most incredible things so I started keeping them in a notes folder in my phone, and some of those make it onto objects.

HJ: Hit me with a few of your favourites.

GC: Hangovers are glamorous if you look at them the right way.
I’m afraid beautiful men will be the death of me.
Homophobia. Such a disappointment.
You can’t sleep on me and claim that you’re woke.
Why is no one brave enough to date me?
Love your hair, hope you win.
High quality, high calibre slut.
I want to swim backstroke in your white privilege.
I don’t want a bong in my house, I am trying to turn my life around.

These gestures all hold this sense of community and love, and reflect one of the most important components in my life, which is my chosen family. They have become very much the heart and soul of the way I view my work so I find something very therapeutic about producing these messages on clay. It gives them a validity that demands to be read. 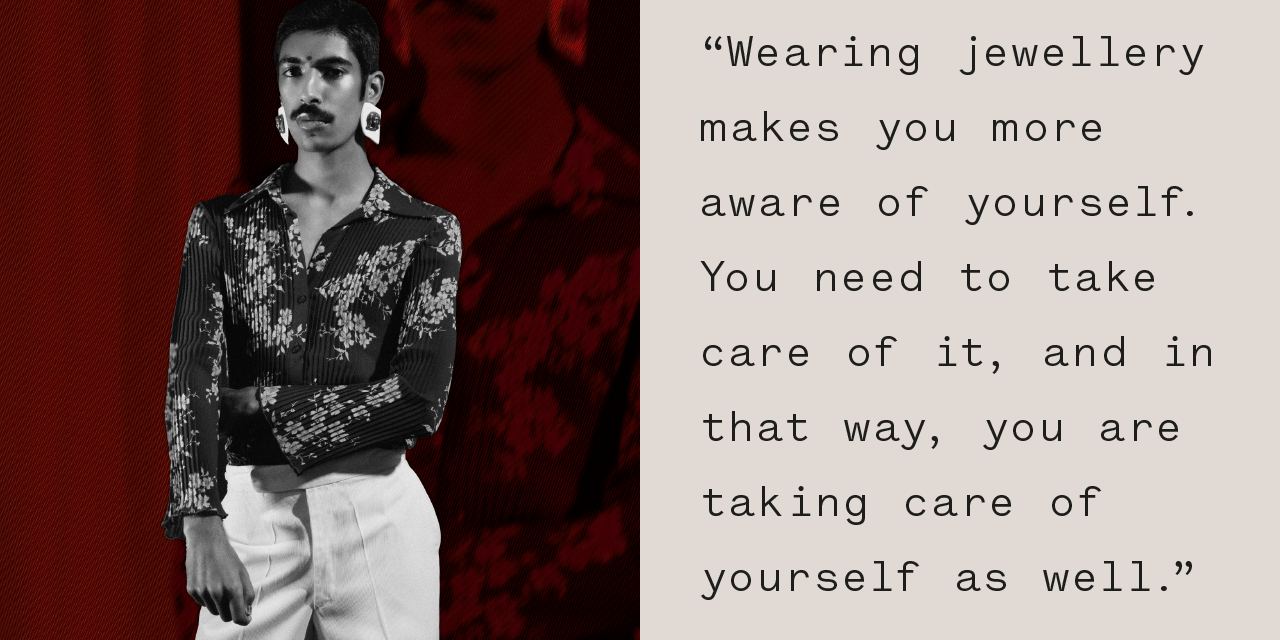 HJ: How do you want the person who wears your jewellery to feel?

GC: I want the pieces to be an anchor for the wearer, for some kind of self-awareness to be brought about by them. I play with the balance between creating something fine that doesn’t put too much weight on the body yet is also robust enough to survive. There’s something about wearing jewellery that makes you feel more grounded, more aware of yourself. You need to take care of it, and in that way, you are taking care of yourself as well.

HJ: How do you feel about South Africa’s creative scene right now?

GC: It’s a very culturally beautiful place to grow and work in. I have a lot of friends in the industry and we all support each other. But there’s been this kind of competition in the past two years as the rest of the world has decided to start looking at ‘Africa’. And by ‘Africa’, that usually means South Africa because we’re very much the portal through which the northern hemisphere looks at the continent. As a result, we all want to do well but we must remember that we already are. Our industry is just small, and we don’t have a support infrastructure from government, but that means the younger generations are taking it into their own hands, starting businesses and engaging in their own self-proclaimed validity. They have the self-assuredness to make something and sell it on Instagram and that makes me happy.

HJ: Where do you hope to take your work next?

GC: I’m interested in doing a masters in jewellery, opulence and performativity, in queer theory and the way in which gestures of fabulousness adorn our bodies. And I’d like to exhibit my jewellery in a commercial gallery space in the same way I normally show my larger scale sculptural works because there’s not enough appreciation in South Africa in terms of jewellery as an art form. We don’t have jewellery museums. So, I would love to be able to be part of instigating that conversation and interest in this country.